If there is something that people love as much as tweaking their editing configurations it’s probably the selection of color themes. A good color theme can make your work much more pleasant and a bad one that literally impair your vision. It’s a fact of life that I’m a firm supporter of low-contrast color themes with dark backgrounds - I find them easy on the eyes and I feel that they don’t strain the eyes as much as most themes. I’ve even ported a couple of popular themes to Emacs - Zenburn and Solarized.

In this short article we’ll see how color theming has changed in Emacs 24 and I’ll share with you a few tips on theme creation and distribution.

Prior to Emacs 24 the most popular way to incorporate custom color themes into Emacs was the color-theme package. While it usually got the job done it had some problems that I won’t be discussing here and more importantly - it’s a third-party package, that’s not part of Emacs proper.

Emacs 24 finally introduced a new standard way of dealing with color themes (based on Emacs’s built-in customize facility). While it doesn’t have a proper name (as far as I know) it’s commonly referred to as the deftheme facility, since deftheme is the name of the macro you’d use to create such a theme. ( deftheme has actually been around since Emacs 23, but it was heavily improved in Emacs 24 )

Emacs 24 comes with a selection of built-in themes that you can choose from, so you’re no longer bound to the default theme (which I find quite ugly). To choose a new theme just do a M-x load-theme (tab completion is available for the names of the available themes). At this point you can give the command a try with the tango theme. If you like a theme so much that you’d want to use it all the time you can put in your Emacs configuration (.emacs or init.el for instance) like this:

If you’d like to return to the default-theme just do a M-x disable-theme.

How do you create a deftheme theme? Quite simply actually - just do a “M-x customize-create-theme”. You’ll be presented with an UI prompting you for a theme name, description and faces. After you save the theme a file called name-theme.el will be written on your filesystem. Here’s its skeleton:

There was also an online theme generator here, but it seems to be down at the moment.

Personally I dislike customize a lot, so when I needed to create a Emacs 24 theme for the first time I’ve just opened the source code of the built-in tango theme and used it as a reference.

Once you’ve created the new theme you’ll have to drop it in a folder that’s on the custom-theme-load-path. I’d suggest the following:

If you’re an Emacs Prelude user you’re already covered. This folder exists and is automatically added to custom-theme-load-path by Prelude, so all you have to do is drop there the themes you’d want to try out.

You may find the rainbow-mode useful when developing color themes. If fontifies strings that represent color codes according to those colors. The mode is known to be a great addition to css-mode, but I find it very helpful with color theme development as well. It’s also included (and enabled) in Prelude by default. Here you can see it in action. 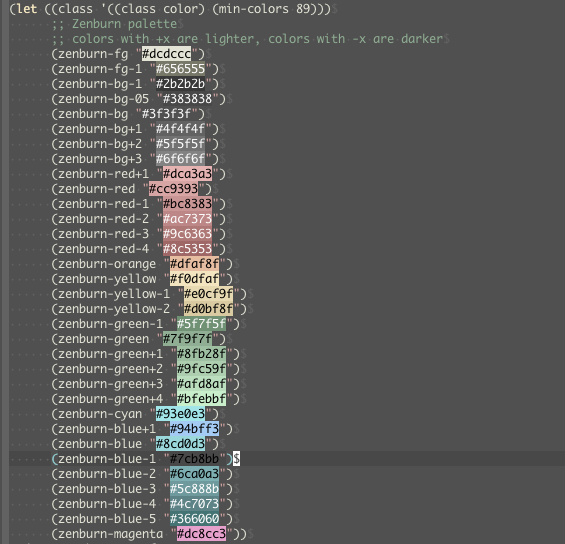 The Emacs package manager package.el (formerly known as ELPA) is gaining a lot of popularity lately and the community Marmalade repository already houses a few Emacs 24 themes that you can install from there. If you’re developing a theme that you’d like to submit to Marmalade it’s imperative that the theme modifies the custom-theme-load-path in an autoload - otherwise it won’t be of much use. Add the following snippet (or something similar) before the provide-theme line if your custom theme:

I’d also advise you follow the proper naming convention name-theme.el so that it’s apparent that your theme is deftheme compatible.

Oh, and one more thing - porting themes from color-theme to deftheme is really simple (just have a look at the old and the new version of Zenburn in its repo), so you should really consider porting all the themes you maintain to deftheme.

Color theming in Emacs has never been easier. It’s time to kill color-theme once and for all. If you’ve ever developed a color theme for it I urge you to convert it to the deftheme format and upload it to Marmalade.

And if you’ve never developed a color theme for Emacs because you were afraid it was too hard - now is the time to do it.