Let’s face it - although a vanilla Emacs installation is quite powerful almost nobody is using Emacs without a pile of add-ons. And managing those add-ons is quite frankly a pain in the ass. Traditional options included installing Emacs add-ons via the operating system’s package manager (if available), downloading .el files from various locations (everybody hates packages distributed only on Emacs Wiki with no canonical version control repo) and simply sticking them on the load-path, etc. It’s more than obvious that such solutions are less than ideal.

For instance if you’re installing Emacs add-ons via a package manager and you have to change OSes (or machines) you’re mostly fucked. On the other hand piling files manually in .emacs.d is equal to hell in the version and dependency tracking department. There has to be a better way, right? Wouldn’t it be nice if Emacs had its own package manager similar to the likes of homebrew, apt or yum?

Emacs 24 finally introduces such a tool - its name is package.el (very original, right?) and its promise is to make your lives a bit easier. Does it manage to deliver on that promise? We’ll see that in a bit…

package.el is bundled with Emacs 24, but it’s not bound to Emacs

Put this snippet of code near the beginning of your Emacs config, since you’ll definitely want packages installed via package.el to be initialized before you start tweaking them.

What package.el basically does is that it connects to a list of package repositories, retrieves the list of the packages there, presents it to you in a interactive fashion and lets you install the packages you like (of course you can also remove the once you don’t like). package.el understands the dependencies between packages and if one package requires others to run they will be installed automatically (which is really neat).

The magic starts with the command M-x package-list-packages. At this point you should see something in the lines of this. 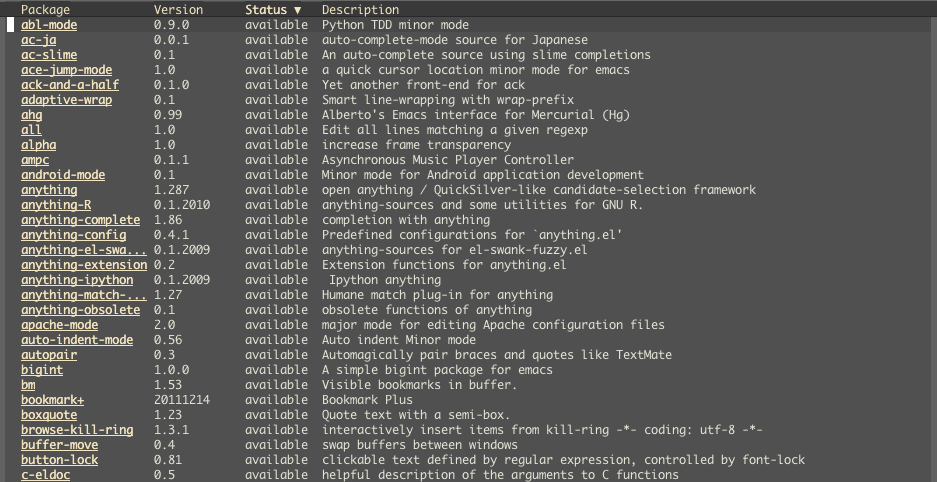 Initially package.el didn’t provide the option to update a package, but that should be fixed in recent Emacs builds. According to this thread you can even update all of the installed packages by using the “U” key in the packages list view (I guess that a small “u” would update only one package). Unfortunately my build is lacking those capabilities so I cannot comment of their usability.

You’d probably notice that your list of available packages is not particularly long. That’s because the official Emacs 24 package repository has a strict licensing (and source code) requirements to include a package there. Luckily there are a number of community-maintained package.el repos around with much more relaxed requirements. Probably the most popular of them is Marmalade, created by Nathan Weizenbaum of Sass and Haml fame. You can include it in your package-archives list like this:

Marmalade provides a web based UI for package upload and search (both quite buggy unfortunately) and the ability to share the maintenance of a package between several people, who’ll be able to upload new version of the package. There’s also a Emacs Lisp Marmalade tool, that allows you to submit packages directly from Emacs.

Using the package.el UI is ok if you’re a casual Emacs user, but what if you have a custom Emacs configuration, stored under version control, that you’d like to instantly deploy on any OS/machine (like Emacs Prelude). Here in play comes package.el’s programmer interface. In Emacs Prelude I use the following code to install a list of required packages automatically on Emacs startup (if necessary):

This code check if all of the packages in the list are installed and if any of them are not installed if refreshes the local package database (in the case a required package for recently added to the remote repo) and installs them.

To be able to publish a package to Marmalade (or another repo) it should comform a standardized structure. A single-file package might look like this:

A multi-file package should have an additional file named <name>-pkg.el that should look like this:

The Bad and the Ugly

While package.el is great on paper, for it to really take off some problems need to be resolved.

Updating should be easy

One of the best features of OS package managers is that they make it really easy to update all of the installed packages to their latest versions. Currently package.el doesn’t support that (at least to my knowledge), with the exception of the “U” key in the list packages view. This seems to me like a pretty basic feature and I (and everyone I’ve talked with) would really like to see it in Emacs 24 final.

Too much is riding on Marmalade

Marmalade has become extremely important in the recent months and the list of packages there is growing every day. This would have normally filled me with great joy, if it weren’t for a few problems.

It seems that the project isn’t getting much attention from its maintainer (which is understandable, given the fact that he’s maintaining several high profile projects + the fact he’s a full time Google employee). As a result Marmalade is quite buggy (especially in the UI department) and is missing key features, like the ability to contact a package maintainer. At some point it was even lacking the ability to delete a package. Uploads don’t work reliably there, package refresh sometimes yields http errors that require manual M-x package-refresh-contents and from time to time there is even downtime of the service.

The fact that its backend is written in Node.js (great technology, but not widely understood for now) and hosted on Google Code, doesn’t improve the situation a lot. A Ruby or Python based solution hosted on GitHub would certainly gain much more traction in the community (and I’m planning to start work on one soon).

package.el is light on the documentation and you’ll have to explore its source code if you want to implement its required interface (which luckily is very simple). I hope this will change by the release of Emacs 24.

Package authors rarely tag versions that could be uploaded to a package.el compatible repo and from time to time don’t follow the basic structure required. I always contact package authors to let them know of such shortcomings in their packages and so should you.

el-get is another popular Emacs add-ons management solution that has recently become popular.

el-get allows you to install and manage elisp code for Emacs. It supports lots of different types of sources (git, svn, apt, elpa, etc) and is able to install them, update them and remove them, but more importantly it will init them for you.

That means it will require the features you need, load the necessary files, set the Info paths so that C-h i shows the new documentation you now depend on, and finally call your own :post-init function for you to setup the extension. Or call it a package.

el-get is inherently troublesome piece of software on Windows machines and was originally designed to make it simple to obtain the latest versions of packages from git - a practice which I profoundly dislike. Master package branches are often buggy (but there are also authors that never tag versions and rely on the rolling release model) and I’m generally supportive of the stable version releases. While some view it as a nice addition to package.el I feel that el-get is too low level tool (in its approach to the problem) and should be avoided.

A few hours after I posted this article it got a nice lengthy comment by el-get’s author. Since I believe, that the comment is quite interesting I’m adding it here without any alterations.

As the author of el-get, good article! The Emacs extension situation is far from ideal and needs hard critics so that work is done to improve it.

I now want to share with you some of the features that are currently only available in the development branch of el-get (soon to be released as 4.1): you can now easily checkout a stable branch from a git repository (thanks to the :checkout property) and you can even setup which checksum you want installed.So when using git, the checksum is in fact a revision, when using emacswiki you have to compute the checksum (doing M-x el-get-checksum) and register it in your el-get-sources setup, then if the file change on emacswiki el-get will refuse loading it (hopefully until you’ve done your review then updated the checksum).So while I perfectly understand your reserve toward depending on el-get, I believe that your concerns are being solved now.I would like to believe that authors of emacs lisp scripts would take the time to consider formatting their sources for package.el. Today it’s far from granted, so by choosing ELPA you miss a lot of things. And for the situation to change you need to have the authors willing to package their extensions, or you have to fork their work. With el-get you have access to 536 packages from the get-go, and all of emacswiki (that’s currently more than 1700 packages) after you’ve done M-x el-get-emacswiki-refresh. As of writing this comment, my M-x el-get-package-list contains 2106 packages ready to install, almost all with descriptions.el-get is about social packaging where it’s easy to prepare a recipe for a package, whatever distribution means its author picked. Then you can share that recipe very easily, for example with el-get on github where we’ll be happy to add your work and have it installed by default when users either install el-get or do M-x el-get-self-update.As for windows support, it all depends on the packages you want to install. Most of them just work out of the box, being a single emacs lisp file (.el). Some of them require to have extra tools installed, from git or svn or mercurial to make and autoconf. That’s only how the authors are shipping their extensions though, el-get is only providing for an integrated way to get at it. We have accepted several improvements so that the windows experience matches the others OS, and we consider windows a first class citizen here.

package.el is the future of Emacs add-on management - of that I’m quite certain. It’s far from perfect, but even in its present flawed form it has already simplified the life of many Emacs users immensely. I urge all of you to stop distributing Emacs packages via sources such as the Emacs Wiki and to put a heavy emphasis on package.el. Make your packages compatible with it, upload them to a community maintained repo (or the official if possible) and keep them up-to-date. Your users will love you for that!

I’d like to see a replacement to Marmalade in the future as well. A more robust and polished solution, maintained by a team of several people. Hopefully that moment is not that far in the future.