Recently I’ve decided to have a look at the current development version of Emacs - namely Emacs 24. I was quite impressed with the work done by the development team so far so I decided to share some of the cool things I’ve found in Emacs 24.

It seems to me that this will be the most important Emacs release in quite some time.

There are a couple of new build flags support in Emacs 24 - most notably there is GTK 3.0 support present. You can enable it by passing the –with-x-toolkit=gtk3 flag to configure. There is also built-in support for selinux (that can be disabled at build time) and the installed info and man pages are now compressed by default.

All in all - nothing major has changed with the installation process. 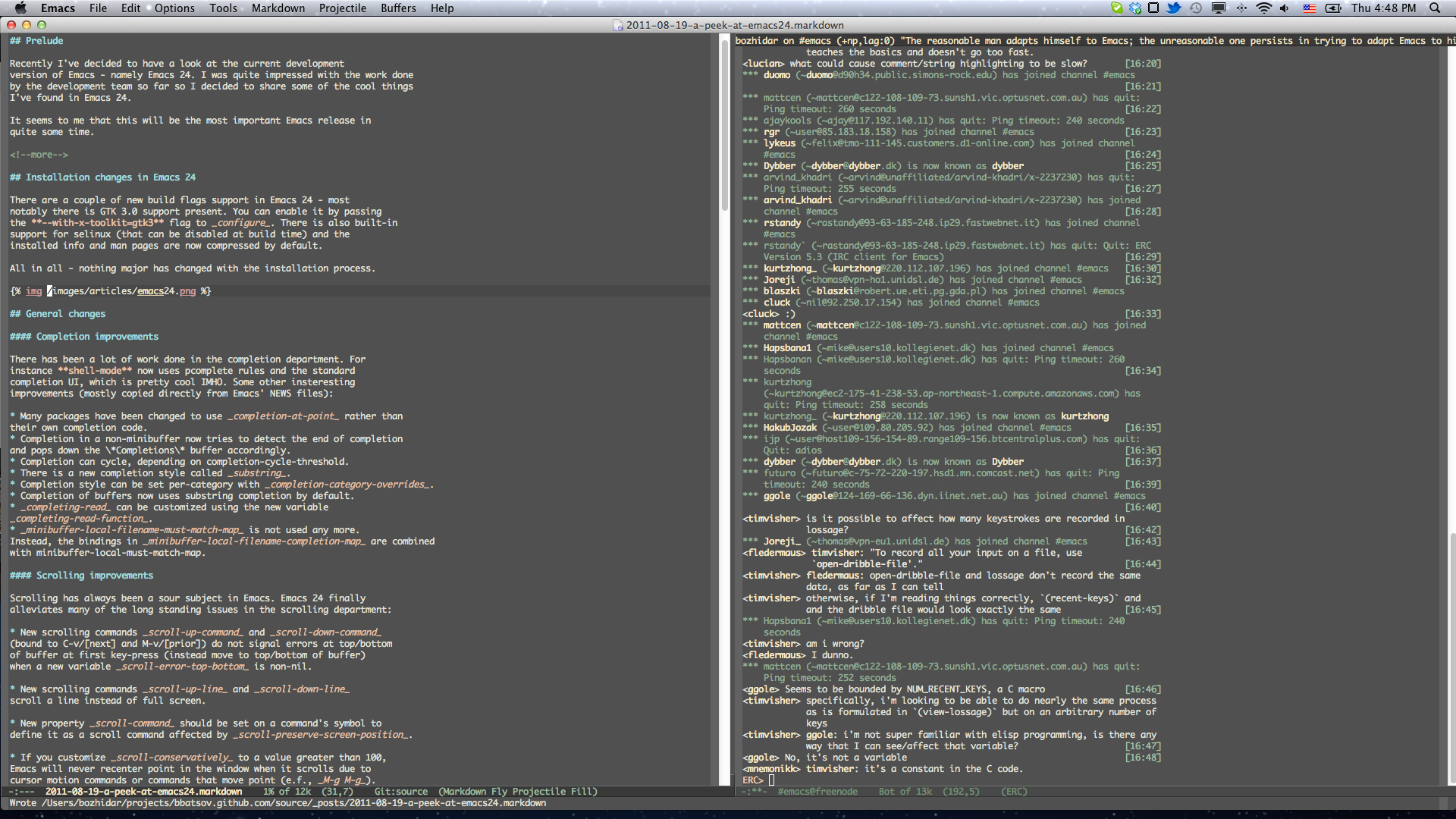 There has been a lot of work done in the completion department. For instance shell-mode now uses pcomplete rules and the standard completion UI, which is pretty cool IMHO. Some other insteresting improvements (mostly copied directly from Emacs’ NEWS files):

Scrolling has always been a sour subject in Emacs. Emacs 24 finally alleviates many of the long standing issues in the scrolling department:

Linux users are in for a treat:

OS X users seem to be a bit neglected, but still:

ELPA (a package manager for Emacs)

I’m personally a little bit underwhelmed by ELPA at this point. It lacks something that I deem rather critical - the ability to upgrade already installed packages automatically. Hopefully, this deficiency will be amended in the near future.

There is also the restrictive licensing policy that GNU enforces that will certainly prevent a lot of packages from being distributed via the official ELPA repo.

Most hackers are very fond of custom color themes. I’m no exception - after all I’m the maintainer of the Zenburn color theme for Emacs. The problems with custom color themes so far was that depended on the horrible external package color-theme, that wasn’t maintained particularly actively in the past few years.

Now Emacs 24 comes with a built-in theming infrastructure affectionately called deftheme and several quite nice themes that Emacs users can choose from (like tango). I’ve already ported Zenburn to the deftheme infrastructure, so if you like it be sure to give it a try. The magic command you’ll need to keep in mind is called load-theme.

Emacs is after all mostly an editor and there is a lot of work done in the editing area in 24:

The default handling of clipboard and primary selections was changed to conform with modern X applications. In short, most commands for killing and yanking text now use the clipboard, while mouse commands use the primary selection.

In the following, we provide a list of these changes, followed by a list of steps to get the old behavior back if you prefer that.

Emacs 24 brings quite a lot to the table. I’ve barely scratch the surface as far as the new features are concerned. There is so much more - improvements to lots of the existing modes (most notably much better support for distributed VC systems such as Git, Mercurial and Bazaar), internal cleanups and improvements, etc.

I truly feel that Emacs 24 will be the most important Emacs release in a long long time and I commend the new dev team leads for their passion and resolve to modernize Emacs.

P.S. Btw The Emacs Prelude already makes use of some the new features from Emacs 24. In due time it will make use of much more of them. It’s one of the very few advanced Emacs setups targeting exclusively Emacs 24.

A lot of people have been asking me about the level of stability and usability of Emacs 24 at this point since I didn’t mention them at my article. I’ve been using Emacs 24 for all of my work for about a month now and I’ve experienced absolutely no crashes/freezes/any sort of instabilities. On the usability side I’ve encountered a few bugs that might be related to some work in progress (for instance face inheritance doesn’t work with deftheme), but nothing major.

If you’re considering trying out Emacs 24 more seriously - my advice is to go for it. With no clear release date in sight you might be in for a long wait before the final release is here and you’ll be missing on some really great features in the meantime. I’ll write a separate article soon detailing how to get started with Emacs 24 on the most popular platforms (Linux, OS X and Windows).