That’s one article I’ve really struggled to write. For the past 2 weeks I’ve been totally consumed by the horrible war in Ukraine. For many years I believed that we’d never see another war in Europe and that our society had evolved enough to render wars obsolete, but Russia and its dictator Vladimir Putin proved me wrong.

Ukraine has a very special place in my heart, so the war taking place there is extremely personal for me:

The war in Ukraine is not new. Ukraine has been at war with Russia for 8 years now. But the war was somewhat contained in the eastern part of Ukraine and the world had forgotten about it. Admittedly, me and my wife didn’t think much about the war either. When news started to appear in December about Russia amassing forces all around Ukraine for a possible invasion we didn’t believe this would happen. At least I didn’t. I repeatedly told Yuliia that nobody is so crazy to start a war in the heart of Europe in the 21st century, not even Putin.

We’ve spent a couple of amazing weeks with her family and in Kyiv in the middle of January. Life was going so normally. Our friends were worried about the news, but noone believed there would be a full-scale war. Then early on the 24th of February we were woken up by a phone call from my mother-in-law. “Russia is invading! There are explosions everywhere!”. I remember I was still so sleepy and confused that I wasn’t sure if I was hearing this correctly.

The next week was a complete blur. We were very afraid for our family and all the people we knew in Ukraine. A lot of “pundits” predicted that Russia would occupy all of Ukraine in a couple of weeks and that Kyiv would fall in a couple of days. All sorts of terrible thoughts were in our heads. As stressed as we were, however, we are well aware that everyone in Ukraine had it much much worse. Friends were literally sending us videos of tanks and firefights taking place in front of their buildings. They were we sleeping in cold metro stations and cellars. And none of them was really getting any sleep. We felt afraid, bitter and powerless.

Writing all of this makes me angrier and angrier. But I didn’t start this article to vent out, but rather to ask everyone, who follows my open-source work to help save Ukraine. There are many ways to help:

The Ukrainian government has put together a great guide on helping out and I encourage everyone to share it around. I’ve been doing all of the above as much as I can. For the time being I’ve lost all my desire to work on open-source. I’ve lost my desire to do pretty much anything. Tragic events tend to put things into perspective and re-arrange one’s priorities.

That’s all from me. I know that the brave Ukrainian people will prevail. I hope that our crooked/cowardly EU/NATO politicians will do more to help them. I know that in Ukraine, Russia and Putin will face their Vietnam moment. I hope that Putin and all his cronies will burn in hell for what they’ve done.

If my article managed to inspire even a single person to help in some way, then it was a great success. Pay the message forward. The time to act is today. Ukraine’s war is not just a fight for Ukraine, but it’s a fight for long-term freedom and democracy in all of Europe. Slava Ukraini!

P.S. That’s one of the final pictures I have from Kyiv. I keep revisiting it all the time these days. Me, my wife (next to me) and several wonderful colleagues from Kyiv. 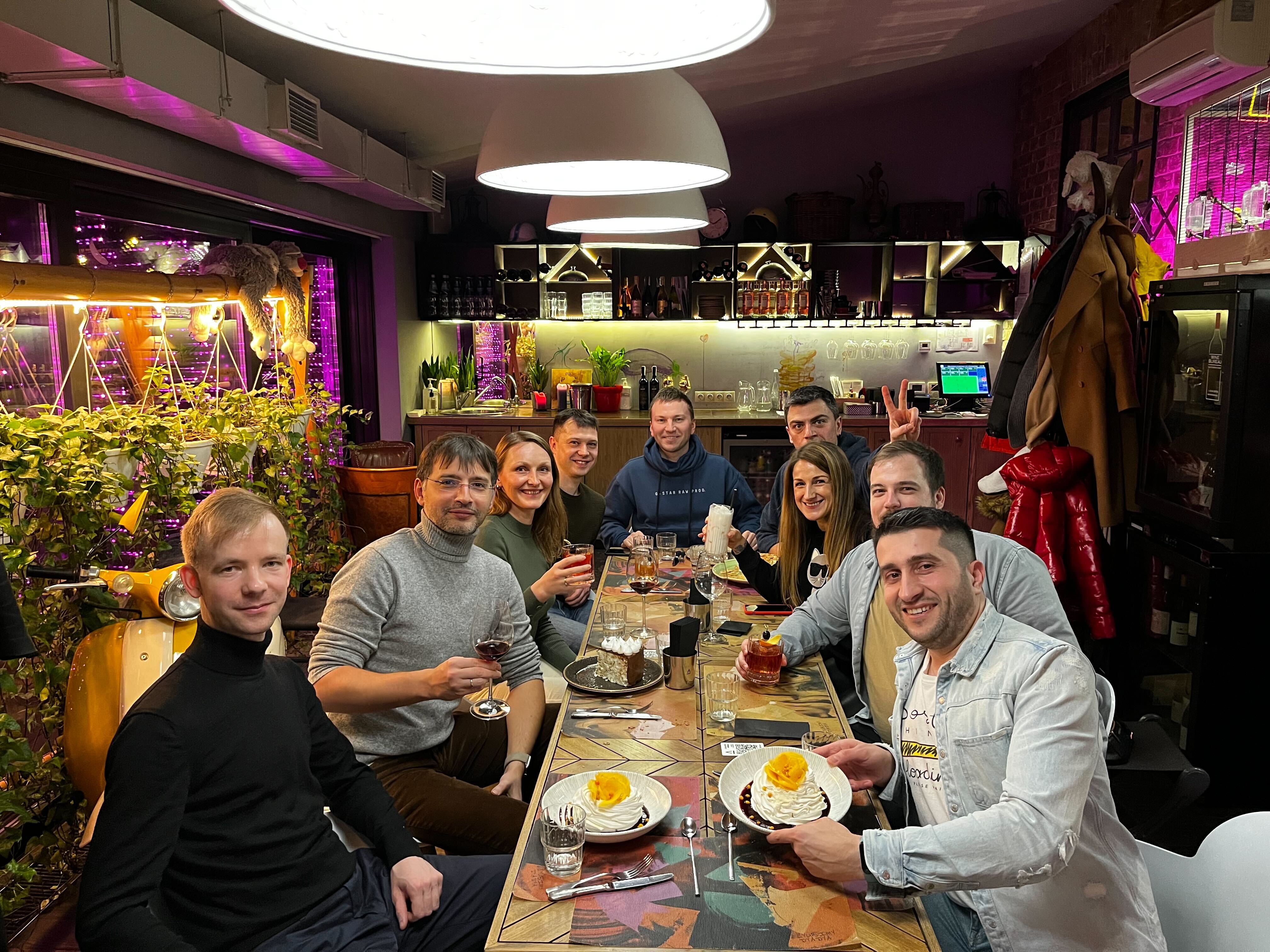 The picture is from the 14th of January, but it seems it was taken a lifetime ago. Once the war is over the victory party will be in “Lyubimy dyadya”!

One thing I’ve noticed on my journey to learn OCaml was that reading (text) files wasn’t as straightforward as with many other programming languages. To give...

Today I’ve noticed that I’ve written 36 articles to date here, which beats my previous annual record of 34 articles from 2011. I definitely didn’t see this c...

Lots of programming languages have some built-in range functionality, that’s typically used to generate a list/array of integer numbers. Here are a couple of...

Why Bother with a Custom Desktop PC in 2022?

Many people are quite surprised when I tell them that my primary computer is a custom-built desktop PC, that I assembled myself. After all, desktops have bee...